Wearable technology started with the watch enabling individuals to tell the time, initially in the 1500’s via a necklace worn device, and later in the 1900’s as the wristwatch. Pulsar’s calculator wristwatch was the first consumable wearable device to achieve global success. Fast forward to the 21st Century and we now see computer technology integrated into so many parts of daily life. In the year 2000, the first Bluetooth headset was sold and 2004 saw the launch of the Go Pro. 2013 heralded the development of Google Glass, the first voice operated optical head mounted display with hands free internet access with Augmented Reality and the ability to capture images. Amazon’s first Echo-Loop was launched in 2019, a sleek design enabling users to make payments, manage stress and inspire innovation. Connected wearable devices are expected to have reached over 1.1 billion worldwide by 2022 with the change from 4 to 5G. Pioneers have successfully extended and enriched the functionality of clothing, harnessing the electronic functions used in everyday life and incorporating them into devices and accessories that can comfortably be worn on the body. 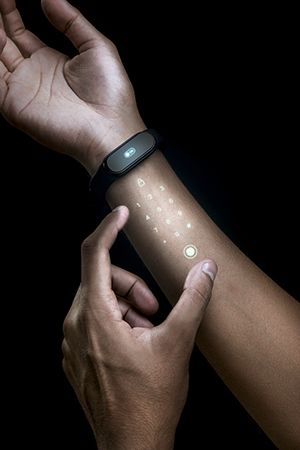 Athletics has been one of the areas to really benefit from wearable technology with numerous devices able to monitor an athlete’s output; movement, heart-rate and performance alongside environmental conditions and potential health risks. The wearable technology market has been steadily increasing over the past few years with the huge popularity of fitness trackers, monitoring diet, exercise, sleep and movements. Some devices will even prompt the wearer to move after a sedentary position for 20 minutes as prolonged sedentary behaviour has long been associated with health concerns. Prompts to improve posture have been effective in studies illustrating positive changes of behaviour. The future may hold many further collaborations between clothing manufacturers and technology companies inputting smart sensors with 5G technology and enabling closer connections between humans and the IoT. In a recent study by Statista from 2019, the most popular areas of the world for wearable technology are China, USA, India, UK and Germany with the largest market share of 36.4% falling into the age group 25-36 years’ of age.

Regular users of wearable technology tend to be on the lookout for the latest and greatest versions of their favourite gadgets.  The use of Smart Watch by Apple has become a way of life for many. As well as telling the time, it is a ‘phone, capable of receiving emails, recording noise levels, track heart rates and so much more. Similar technology is used to alert family members of potential falls and accidents of vulnerable loved ones, allowing them to live alone but retain a degree of independence. This is becoming particularly significant with an ageing population.

The Moodmetric Smart Ring is destined for exponential growth in 2020 as it is capable of stress measurement and management, payments, vehicle access and control of other smart devices. A monumental amount of features for such a small device. Mental health issues are currently very topical and a ring that can help to measure stress as a key earlier indicator of depression could prove invaluable to the medical profession.

Just considering the medical profession a little further, the options are endless. Just think for a moment about the kind of wearable devices (still in the prototype stage) that could be specifically designed for the prevention of disease and maintenance of good health such as weight control, blood pressure monitoring and monitoring of physical activity. Data gained from the wearable device could have a direct impact upon a clinical decision regarding medication etc. There are arguments in favour of more wearable tech for these kinds of devices to improve patient care and reduce costs to the NHS. As the devices are still at prototype phase, there is still a long way to go in terms of patient acceptance, security and confidentiality, ethics and the Artificial Intelligence (AI) required to cope with the data outputs.  The ‘big data’ that these devices are capable of collecting and utilising with AI could revolutionise the treatment of some extremely serious conditions such as heart diseases, Parkinson’s and Diabetes. In short, wearable technology can help significantly with health management, but the questions of security, ethics and acceptance by the user still remain. 5G will also play a huge part in the volume of data that can be transmitted and communicated to numerous hospital devices at the same time. 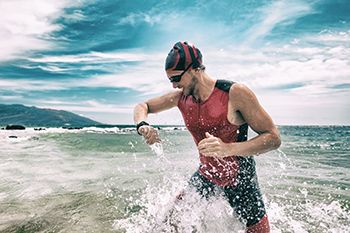 Looking into these developments, generally speaking, there are two huge challenges when designing a functioning wearable device – will the device behave/interact/collect data as required, and the second challenge, will the device continue to function when exposed to the environments in which it is designed to function. For example, a temperature sensor on a static device will have to withstand the temperatures within that immediate environment and any thermal shock or cycling that may take place. A temperature sensor as part of a wearable device has the added consideration of physical interactions; the device will be moved, worn, may see impact, may be flexed and potentially exposed to a number of additional elements, such as water or chemicals, for example. It is therefore imperative that these devices are protected accordingly to ensure reliable performance when utilised in their end-use environments.

Protection for the exposed electronics/components of the wearable device can be afforded in the form of Encapsulation Resins or Conformal Coatings. The variety of potential applications can also generate another challenge and that is to select the most suitable protection compound. As we have already concluded, the wearable device is likely to collate and transfer data, whether it be direct to another device or system or via a sensor to record changes in information gathered. This connection to other devices may operate via radio waves and therefore any protection compound used, must allow RF signals to be transmitted without any interference. In addition to this, the environmental conditions and general use of the device must be considered in order to produce a full picture of its working life. 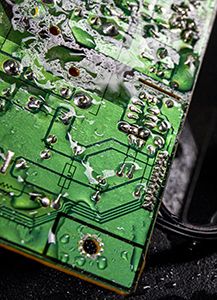 To enable a better understanding of likely performance and simplify the selection process, it is possible to draw on experience from other industries and technologies. For instance, if we think of a wearable device that can be worn by a swimmer to monitor heart rate and general health when in the pool, it is immediately understood that this device must still work when immersed in water. Any changes in temperature will be minimal but quite rapid and the frequency and length of time the device could be immersed in water is an unknown quantity.  It is therefore a sensible assumption that the device will be required to be constantly operational when immersed in water. This application can be likened to that of a sonar buoy used in marine applications where sensors are utilised for providing vital information about the sea environment. In this case, the device will have to send an RF signal and operate when constantly immersed in salt water; a similar environment to that of the wearable health tracker worn by the swimmer. Trackers used on sea or river dwelling creatures to study habits and behaviour must also receive similar consideration.

As a company, Electrolube effectively utilises and compares the information and knowledge gained from other industries. For example, salt water is generally more corrosive than the water found in a swimming pool and therefore the application experience gained from the sonar buoys will show the performance of a device protected with a suitable potting compound in a similar but more aggressive environment. This is obviously just one example of many different considerations; the degree of flex and toughness of the device, the operating temperature range and the possibility of any chemicals coming into contact with the device are all possible factors to take into account during the selection process. Thinking about all of these properties and not forgetting the need to allow connectivity and information transfer, there are many properties such as the dielectric constant, salt mist resistance, shore hardness and elongation at break that can be used to find the optimal product for in-use testing.

It is clear that each application of wearable technology will have its own criteria in terms of performance, environment and expected use and in all cases, a reliable and accurate response is required from the device. Whatever the application, the wearables market is definitely a hot topic and right now, technology is shaping our lives more than ever. Home working and perhaps more importantly, home schooling, is changing before our very eyes as technologies such as podcasts, videos with flipped classrooms and the myriad of apps, games, AR/VR and simulations available on wearable devices become part of the educational system that the new generation are facing.

The concept and new developments in this field are what will continue in the future and with the variety of devices possible will come the vast array of requirements which will define the need for suitable protection medium. Wearable technology is designed with the intention to make everyday tasks easier and more accessible. It will encourage different methods of interaction and communication, again increasing our mobility within the electronic world and thus shall further enhance relationships and collaborations in this field.

If you would like to talk to us about an article or a related issue, please call or send us a message using the details below:

Send us a message

How To Mix Silicone Resin Packs

Wearable Technology and the Future of Electronic Developments

Don't miss out - subscribe to receive email from Electrolube.

Our unrivalled, very personal customer service also extends to every corner of the world. You can rely on our fully trained staff to be knowledgeable and up to speed with the latest technological developments. Having a named single point of contact helps ensure we work closely with our customers, solving problems in the most efficient way possible. For the latest news and updates from Electrolube, follow us on our social channels using the links below: